Make no mistake, I do not refer to a new theme song that would bring people to tears. Instead I refer to the new cruise ship Royal Caribbean International plans to launch this spring, called Anthem of the Seas. It will be a huge luxury cruiser which will be capable of hosting over 4,000 travelers and it is expected to offer all the luxury one can dream of. 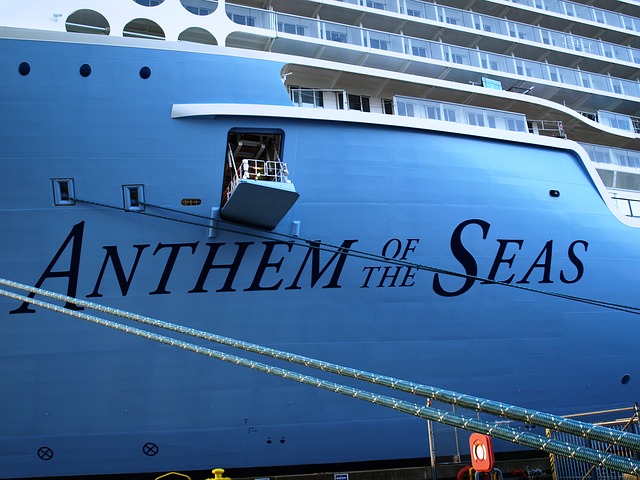 The Anthem of the Seas, as the other Quantum class cruise ship in the Royal Caribbean’s fleet, was built at the Meyer Werft shipyard in Papenburg, Germany. Once afloat, the Anthem will spend its inaugural season sailing to the Mediterranean from Southampton, England, continuing its journey to Northern Europe and the Canary Islands before reaching the Bahamas in November. After that date it will sail its usual itinerary in the Caribbean and Bahamas from the Cape Liberty port in New Jersey. For next year the Anthem is planned to sail to the Caribbean, Bermuda and Canada – it will be the largest ship ever to sail the Canadian waters.

The Anthem of the Seas will house over 4,000 passengers on its 16 accessible decks, with eight decks having rooms overlooking the ocean. Those not housed in such rooms won’t have to miss the marvelous sight of the ocean, though – through the use of real time HD video streaming technology, the rooms with no view will have a “virtual balcony”. This new technology offers passengers a lifelike image of the ocean even when their rooms look toward the interior, to soothe them while they rest, plan their day or even visit www.europalace.com play the best casino games online.

Although traveling on the high seas, passengers will not have to abandon their “port-side” activities. The Anthem of the Seas will offer them a series of attractions and opportunities to spend their time in a creative and healthy manner – a “Sports Court” deck with features like a Wave Loch Flowrider surf simulator and a rock-climbing wall, and even a skydiving simulator. The ship will also feature the “NorthStar” observation tower, which will allow passengers to enjoy an unparalleled view from a height of 135 feet (41 meters). Aside from all the above, the Anthem of the Seas will feature all the attractions passengers have gotten used to at the Royal Caribbean cruises: various pools, 18 restaurants, shops, on-board shows – in short, anything they can dream of to make their trip a memorable one.